Interfaith Roundtable And Vigil Today In Jersey City Following Shooting
WASHINGTON, DC - OCTOBER 27: A vigil participant holds a 'Erase Hate' sign during a Havdalah vigil for the victims of the Tree of Life Congregation shooting in front of the White House on October 27, 2018 in Washington, DC. According to reports, a gunman opened fire on a synagogue in Pittsburgh, Pennsylvania Saturday morning, killing at least 11 people and wounding several police officers before being taken into custody. (Photo by Alex Edelman/Getty Images) 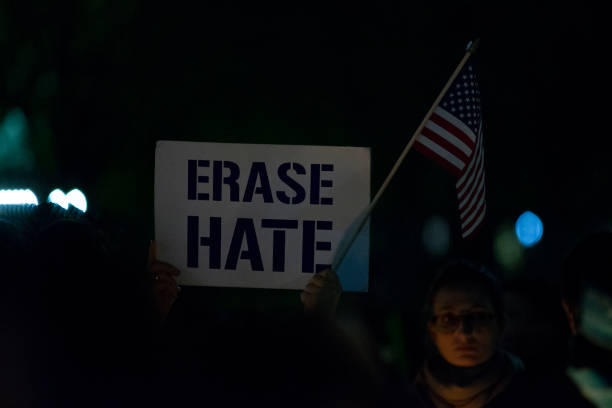 Governor Murphy will be in Jersey City helping the community cope with the shootout this week that claimed the lives of a detective and three innocent victims. Murphy is hosting an interfaith roundtable at Temple Beth El.  Late this afternoon a candlelight vigil will be held at City Hall in Jersey City where groups and leaders will call for common sense gun safety reform in response to the shooting.  Authorities are calling Tuesday’s incident an act of domestic terror carried out by two shooters who were motivated by hate for police and Jewish people.

…Meanwhile the grieving continues as a Jersey City community comes to terms with the senseless tragedy.  The widow of shooting victim Douglas Miguel Rodriguez, spoke through tears in front of a large crowd gathered for a candlelight vigil on the campus of New Jersey City University last night.  She decided to attend the vigil at the last minute, where she offered forgiveness for those who took her husband’s life.  Rodriguez was among the three innocent civilians gunned down in a kosher grocery store Tuesday afternoon.